Arizona wildlife? Whether you live in Arizona or just plan on visiting, you will likely see a lot of it. There is so much wildlife that Arizona has to offer that the question is not whether you will see any, but rather How Much will you see.

Whether it is wildlife plants or wildlife animals, you will certainly find more than a supply for you to discover as wellas enjoy. Arizona is well known for a wide variety of desert wildlife. The first thing that comes to mind is a plant that has a very unique name, known as the Prickly Pear. And also the Saguaro Cactus.
Oh, and we cannot forget about those cute little creatures referred to as Scorpions!

Another hearty cactus is the Ocotillo.

Chances are you also love all of the "wildness" of the Sonoran Desert as I do. I personally love and appreciate both plants and animals, but I have an even greater attraction for the animals. I have always loved animals and since moving here to Arizona, I have discovered several animals.  I will share a couple of my favorites with you. Two of my personal favorites are the Bobcats and the Mountain Lions. For information on an animal some people refer to as wild pigs, whose true identity equals the javelinas.  Just click on Javelinas to learn more.  If you do not like bats, then you should avoid learning just how many species that actually exist in Arizona! If bats are something that you would like to learn more about, then click on the following bats link to learn more. Arizona Bats.

Ironically, just before I began writing about wildlife for this page, a male cardinal was calling one of our backyard trees, home. He was even making an appearance every day... always thrilled to see any cardinal.  It's definitely a challenge sometime to get a good picture. 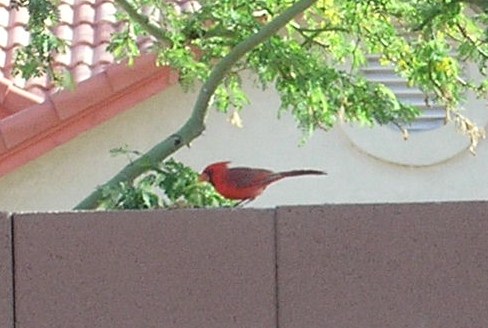 This cardinal likes to hide deep within the tree and it seems that every time just before I have the opportunity to take the picture, he flies away. He is just gorgeous! His red coloring is so bright and rich that it seems surreal. He is certainly giving me a real incentive to purchase a more expensive camera with a zoom lens to get the quality photo that I am looking for.

Another one of Arizona's famous birds, and certainly one of my favorites, is the quail. These quail are quite plentiful and I really like these little guys. (As so do many hunters!) Somehow I don't think I could ever hunt quail because they are just so cute. 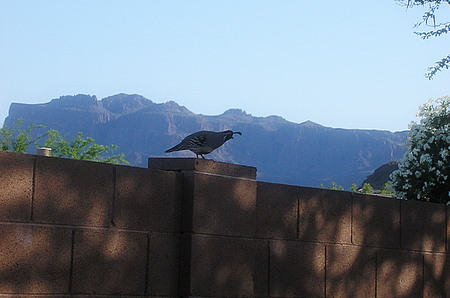 I love that little thing that bounces on their head as they scurry around, which is usually the case. What I mean is that this Arizona wildlife species is not known to fly long distances so you usually will see them running as fast as their little legs will make them go. It's so funny to watch and especially cute when you see the little babies following close behind their parents as they frantically try to keep up!

You will find that you do not have to travel far to see the quails. In fact, I noticed two of them underneath a part of our roof one day. My only concern about this species of Arizona wildlife is that when driving, you really have to be careful not to run them over as they are notorious for running out in front of your car at the last moment! I mean it is almost as if they want to see just how close they can get to death without getting killed. Fortunately, I have never run a desert quail over with my car and I hope I never do.

Hey, have you ever seen a Western Banded Gecko? Check this out.
One day as I was driving home, I saw another one of my favorite animals, known as the coyote, running along the residential street here in Gold Canyon. I was so shocked to see him, although I shouldn't have been, as it is increasingly becoming more and more common to see these coyotes and other Arizona wildlife as their territory becomes more urbanized.

The Sonoran Desert, home to Arizona wildlife, is described by the Wikipedia Encyclopedia as a "North American desert which straddles part of the border between the United States and Mexico, covering large parts of the states of Arizona, California and Sonora. It is one of the largest and hottest deserts in North America, with an area of 120,000 square miles. The desert contains a variety of unique plants and animals, such as the saguaro cactus." I just refer to it as a very beautiful place to both live and love! It has so much diversity to offer that there is certainly something for everyone here to enjoy.

The Sonoran Desert is a huge part of what makes up the Arizona wildlife and the Arizona desert here in the southwestern part of the United States. Like I have said before, many people think of deserts as lifeless, brown, having little if any beauty at all. I believe that many people have a change of opinion after those individuals take the time to visit this beautiful state called Arizona.

If you have never traveled to Arizona before, you should know that it is certainly different in a lot of ways, especially when it comes to the wildlife. The geography is different and it's easy to see why our state is home to very different species than many of the other areas of the United States.

Arizona consists of many, many mountains and plateaus. I learned from Netstate.com that more than half of our state consists of mountain and plateau areas and is home to the largest Ponderosa Pine forest in the United States.

The Sonoran Desert is located in North America and includes a vast area of the southwestern part of the United States. As described by the Desert Museum Organization of Tucson, Arizona, the Sonoran Desert covers approximately 100,000 square miles. This is also inclusive of the southern half of Arizona, but the Arizona wildlife does not stop there, though. It also includes an area of southeastern California, as well as all of the area of Baja California peninsula, much of the state of Sonora, Mexico and the islands of the Gulf of California.

For anyone who needs confirmation that Arizona wildlife exists, you may be surprised, as I was too, to learn the Sonoran Desert actually has more "life" than other deserts in the world. Here, you will find Legume Trees and Columnar Cacti. Two plants within the Sonoran Desert, set themselves apart from the other North American deserts, which are the legume trees and Columnar Cacti.

This very "alive" Sonoran desert houses many plant and animal species. It is estimated that the desert supports approximately 2,000 species of plants! If you are an allergy sufferer though, this could be troublesome in the Spring as things bloom.

Arizona wildlife obviously has to depend on the Sonoran Desert's climate, which can be very "trying," for many of the species. The typical rainfall is a mere several inches. The animal species use their instinctive survival skills and will intentionally decrease in numbers in order to survive.

To make matters worse, U.S. Fish and Wildlife estimate that there are also another 194 species proposed as candidates for special listing. The Arizona Game and Fish Department also maintains a list of Arizona wildlife species, whose existence in the state is threatened. The ever growing population within the state of Arizona has been a major stressor for all creatures without question.

The BLM (Bereau of Land Management) of Arizona, understands the reality and the extreme possibility that these species could face extinction. Many Arizona Wildlife species are threatened but it is everyones' hope their existence will not only survive but increase in numbers for years to come.  Please help preserve all of the species for generations to come.

Once these species are gone, they are gone. If all of these species that were mentioned were to perish, what would we do then? I hate to think of the other repercussions, should this occur.

I am sure that I feel the same way as others do and realize that we all need to protect the Arizona wildlife. Not only do we need to support the Bureau of Land Management of Arizona Wildlife, along with other agencies, we all need to do our part to ensure we and countless generations who follow us will have all of these species to enjoy.

For additional information, check out our states' Game and Fish.