The Saguaro Cactus, pronounced "Sah-wah-ro" is characteristically described by most as A very large cactus, has certainly become a symbol of Arizona. The name is actually a Spanish word, so if you want to pronounce it in Spanish, it's pronounced "suh-wah-doe." Very large! That, in deed, it is. 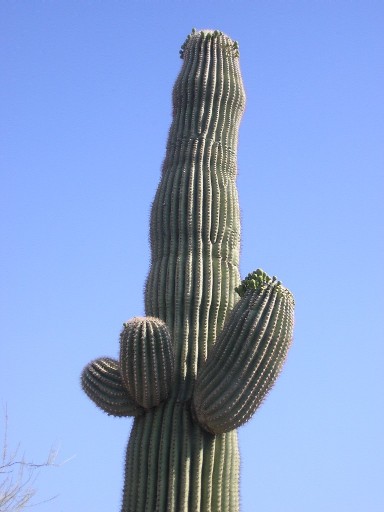 It's specific name is Carnegiea Gigantea, and it can be found in the southwest United States as well as the northern part of Mexico and parts of California. In Arizona, they are very common below 3500 feet in elevation.

The Britannica Dictionary also describes it as being very "slow-growing at first," and reaching heights up to 50 feet. Generally, though, they are usually about 30 feet in height. Let me give you an idea just how slow growing they are. It takes a good 15 years for one to reach just 12 inches. How long will it take to reach five feet, you ask? It will take approximately 20 years for it to reach just five height.

Another interesting fact about the cactus is that they actually do not bloom their beautiful white flowers until they reach between the ages of 50-75 years. Nothing like a "late bloomer!"

They have a very long life span though, living as old as 200 years. The arms that you see on the Saguaro Cactus allow it to store water, which is essential in the desert southwest. Not only are these very tall in stature, they literally "weigh a ton!" Well, actually, they can sometimes weigh more than that, but sometimes up to 10 tons!

Many times, however, they lose their lives to, oddly enough, too much water. What happens is that because the desert floor is so dry the majority of the time, it doesn't take long for an area to become "washed out," causing the cactus to "topple over" because the plant just cannot support the weight of itself.

I personally have seen these succumb to flooding many times here in Arizona and am saddened to see it each time. Birds like Woodpeckers, hawks, and owls all love the Saguaro Cactus and will create holes in the plant where they commonly nest.

The bad part about this is that sometimes these deep holes can cause severe damage to them, including death of the cactus. There is not a whole lot one can do about the birds damaging these icons, but there are now laws that exist to help protect them against people who carelessly dig them up or who abuse them in other ways. 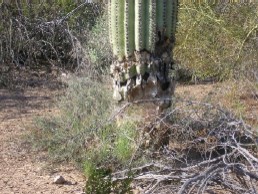 To the right, you will see a picture of the damage that this plant has succumbed to. On this particular Saguaro, the damage was located only at the base of it. The rest of the plant looked very healthy.

It is a fact that humans are the biggest threat to the Saguaro. The development of new housing has, without question, threatens it. It is illegal in the state of Arizona to cause harm in any way to the Saguaro Cactus. So, if you plan on digging one up any time soon, it would be in your best interest to obtain the required special permit that is needed to remove or even destroy one that is diseased.

The Saguaro Cactus blooms only at night during the months of April and May. If you want to get a good view of the flowers, you better get there early in the morning, as the flowers will close during the heat of the day.

The flowers that the plant produces are found at the top of their arms and the fruit that it produces can be seen in the latter part of June. The Saguaro Cactus habitat is one of a rugged terrain consisting of desert slopes as well as flats. The drought certainly affects it, but like other plant and animal species, it has learned it's own coping skills in order to survive.

The "ribbing," or "pleats," as some like to call them, will actually contract when rainfall is lacking. This helps it to use it's preserved water. In times of extreme dryness, many animals such as deer and rabbits, will eat the cactus for it's own water supply.

The Saguaro Cactus has a very smooth surface to the touch, but the spines are a different story. Believe me, they are sharp. I have just barely touched their spines before and know that I would not want to run into one at full speed. These sharp spines are located on the ribs or the pleats on the cactus.

It is very "hearty," as they are extremely hard to kill. I have personally seen some of these cacti that have looked extremely bad in their physical appearance and wondered how they were still even alive. I mean I have seen them with huge holes as big as canyons, along with a lot of discoloration and wondered how they could even stand up. They really are tough in nature.

Part of the reason they are able to survive the elements, is because of their thick root system that equals about a foot, as well as another root system which is the length of the cactus. It would be an understatement to say that they are strong.