Test Your Knowledge About Arizona Bats

There are 28 known species of Arizona Bats here in the Grand Canyon state, more than any other state. 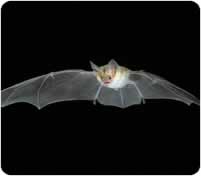 Their order is the Chiroptera, (pronounced Ky-ROP-tair-ah) and sometimes mistaken for a flying squirrel. These creatures are not flying squirrels, though. Flying Squirrels are also considered mammals but unlike bats, they do not fly.

Saguaro National Park in southern Arizona is where you will find the most AZ bat species, which is the most in any part of the United States.

Are You Fond of Bats?

For some people, though, bats are something they feel they could do without.  Despite the fact that some people are afraid of bats, they are perhaps a farmers best friend as they help to keep the number of insects to a minimum.

For those who are not fond of bats, may (just ever so slightly) change their attitude toward them once they learn just how valuable they really are to all of us.  Bats love to feed off of the flying insects you will see during the nighttime hours, such as mosquitoes, moths, beetles, and other insects. These bats are also responsible for pollinating many different types of plants.

If you are one of those people who do not appreciate bats, just remember they are helping to get rid of the pesky mosquitoes and other insects you probably even despise more!

Think of it like this; they are your ally against the insects that are likely eating your cherished plants and may be they won't be as gross looking to you, if that's the case. Personally, I don't mind bats.  I often see them outside on the patio where I live.

Where Do Arizona Bats Live?

According to the Arizona Department of Game and Fish (AZDGF), bats in AZ are found throughout the state and represent four families in all four of the states habitats. AZDGF reports there are only six of the 28 AZ bat species who don't at least once in a while, spend time within the forest habitats.

Bats are considered mammals and are well known for their excellent ability to hear from far away distances. Bats use Echolocation, in which the bats will emit high pitched chirps to determine such things as the distance, speed, and direction of the surrounding objects, which help them hunt for prey.

I was surprised to learn not all bats eat insects for survival. AZDGF notes there are two species of Arizona bats who are considered nectar eating bats.

Both the Lesser Long Nosed and Mexican Long Tongued Arizona bats primary source of food is the Saguaro, Pipe and OrganCactus, as well as the Agaves.

If you enjoy Hummingbirds, you just may notice these very same bats visiting the very same Hummingbird feeders as they too, have a liking for the nectar.

It's a fact all mammals can develop rabies and all animals have the ability to bite if they feel threatened.

AZGFD stresses it is extremely noteworthy for anyone not to approach ANY wildlife as one never knows if an animal is rabid or not.

Bats are susceptible to rabies which is a serious viral disease that results in death if untreated.

Rabies are spread through an animals bite or from the exposure of an open wound to saliva or mucous membranes of an infected animal. The agency's best advise is to avoid any bat or animal you see. If you see a bat during the day, it is pretty likely a sick bat, as they are not known for their daylight activity.

The Arizona Game and Fish Department urges you NOT to get close to bats and to contact them if you see a bat behaving in such ways as laying on the ground or hanging on a wall. (If outside of Arizona, you can contact your local county health agency.)

What many may not understand is that bats are actually gentle mammals and do not attack people, as some may be led to believe. Maybe if people were more well informed about them, the sometimes negative image that some people have of Arizona bats and other bats, would eventually disappear.

All bats like to be left alone and will not bother you if you do not bother them. It is unfortunate that an entire colony can be wiped out if their nests are disturbed in their natural habitat. If you would like to learn much more about AZ bats species, log onto Arizona's Game and Fish Department here at Arizona Department of Game and Fish to learn more.