Want to See Arizona Bobcats? Look Below at One I Saw Just Inches Away! 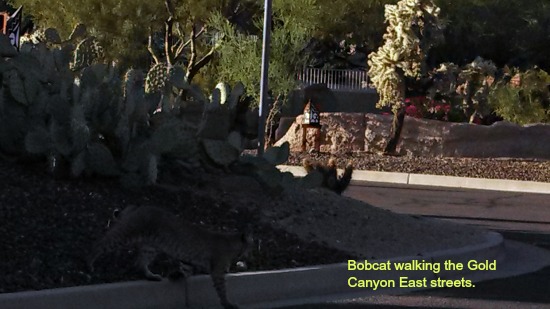 Arizona Bobcats are very common in Arizona. Their scientific name is known as Lynx Rufus. These bobcats may be common, but they are not seen as often as other wildlife, as they tend to come out only at night when they hunt. Lynx Rufus sightings are, however, quite common in some parts of Arizona.

These animals are carnivores and commonly found in the rocky areas where copious amounts of vegetation exist. Weighing an average of 15-22 pounds, the animal may appear to be much larger in size because of its long legs.

They are usually light brown to reddish brown in color and their fur is spotted when they are very young. They also have stripes and other markings on their face as well as spots on parts of their torso. A baby's appearance will change when they mature as these spots will fade. They have very short tails, as their tails are only about three to seven inches in length.

No, Arizona Bobcats Are Not House Cats!

These AZ Bobcats really do resemble house cats and I personally think they really do look like a big house cat because of this strong resemblance. Make no mistake though; these Arizona Bobcats are wild animals and not house cats!

The Lynx Rufus is also known for its distinct characteristics with its ear tufts and short tail, but there are also many other fine characteristics of a bobcat, such as the very soft pads on their paws, and their extreme quickness.

This wild animal species is known for being a great hunter because of their ability to reach speeds up to 30 mph. They are sneaky, too! These little guys are careful with each step  they take. They carefully plant their back feet where their front feet left off, so as not to scare their prey away by making extra noise as they travel through their territory.

Arizona bobcats prefer living in the woods or grassy areas and are also nocturnal animals, when they are most likely to hunt for their prey. They usually live by themselves and can be found in a territory ranging from several to 50 miles long.

AZ bobcats will usually live about ten to twelve years and are known to live off of smaller prey, such as rodents, rabbits, mice, snakes, squirrels, and birds. The Lynx Rufus is a nocturnal animal and will hunt every day and has also been known to eat a small deer from time to time. Farmers have often complained about them as they are also known to have a strong liking for chickens and sometimes lambs.

Not all Lynx Rufus are shy. Every year, you are very likely to hear another story about how someone came very close to one of these Arizona bobcats, including me!  They have been known to get very close to humans but pose no real threat to humans.  (The picture above and below is a shot I took just around the corner from where I live.  What a treat that was to see!)  While they are not known for eating humans, they have attacked on a few occasions, likely when they felt threatened. They would likely attack if they feel threatened, especially if they have young by their side. 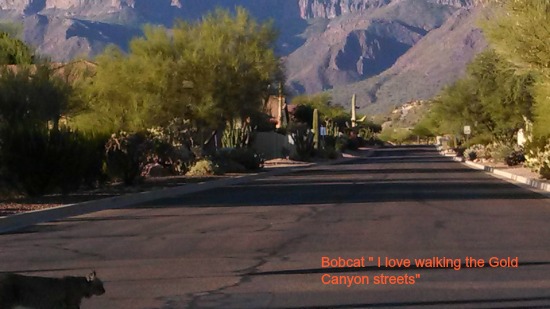 Arizona Bobcats have been sighted by many Arizonans and back in 2004, there seemed to be frequent sightings of these wild cats in the Tucson area, located in the southern part of the state.

It's no surprise bobcats in AZ make their home close to humans as the neighborhoods are perfect grounds for these cats to live.  They are a big part of Arizona wildlife. Many of the residential areas where they make their home, have plenty of prey, such as rabbits, mice, and water, things they need to survive.

Many of the dens are located in remote areas where they are able to keep just enough distance from humans. Some dens have been discovered in areas that would definitely not be considered remote, such as underneath a porch, which has often been the case on more than one occasion.

I remember a very funny story my mom told me about an Arizona bobcat outside her neighbors house here, in Gold Canyon, a city located about 35 minutes west of Phoenix. My mom told me her neighbor had quite the encounter with one of these wild animals!

My mom's neighbor reportedly saw something out of the corner of her eye one day as she looked out onto her patio, so she took a closer look. When she got closer, she couldn't believe her eyes! There was a bobcat lounging on one of her reclining lawn chairs! I would have given anything to see that as well as been able to have taken a picture. The only thing that this "cool cat" was missing was a pair of shades and a tall cold beverage!

My mom has also seen more than a few of these AZ bobcats in the back of her yard, too. She said she saw them outside of her kitchen window.  She said she was startled to see a bobcat outside of her window! As for the bobcat being startled by her presence, well, that just wasn't the case as it made itself right at home outside by the pool area.

The bobcat likely makes this area his home as this type of habitat is perfect for bobcats where my mother lives. There is a wash area that sits about 50 feet beyond her (former) back yard. In fact, my mother has also seen many javelinas along with coyotes in this same wash area. Wildlife at its best! (The only bad part about it is that she would sometimes see dead rats floating in her pool, as they are unable to get back out once they jump in!)

I feel pretty lucky to have seen one of these wild kitties in the area in addition to other wildlife such as javelinas and coyotes.

For the most part these animals are solitary, and you won't likely find them lounging on your patio! They are commonly seen alone, except for the spring time, which is mating season. The mother cat will generally have two to three kittens and cares for them several months by herself until they are mature enough to survive on their own.

For additional informational and interesting facts, check out this Arizona bobcats resource.

Return From Bobcats To Arizona Wildlife