The Ocotillo is not a cactus, but rather a plant. The family name is known as Fouquieria splendens, named after a professor of medicine. 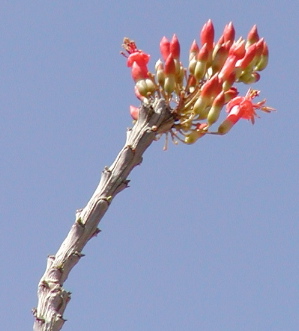 It also has other common names such as Candlewood and Coachwhip. It is dry most of the year and you will see that it has spines running up the tall slender branches. The reason that it is not a cactus is the fact that it produces leaves.

Very long and skinny in nature, you will usually be able to find these plants in their preferred habitat, which is one that is dry. They like rocky slopes and can grow quite high, reaching upwards to 30 feet. As far as elevations, this plant is most likely seen at elevations of at least 3,300 feet.

After a desert rain, you will be able to see the green leaves that it produces. It also produces some gorgeous bright and very rich red flowers, which can be witnessed at least several times throughout the year after the rains.

Generally speaking if your timing is good, you will be able to see the leaves that it sprouts within about a 48 hour period and the flowers shortly thereafter.

The flowers and leaves will dry up as the soil dries out, though. It will become dormant when there is not enough rain which is how it protects itself from the severe droughts.

Return From Ocotillo To Wildlife