Arizona Mountain Lions are somewhat different than bobcats and they avoid humans as well as extremely arid areas of the southwest. 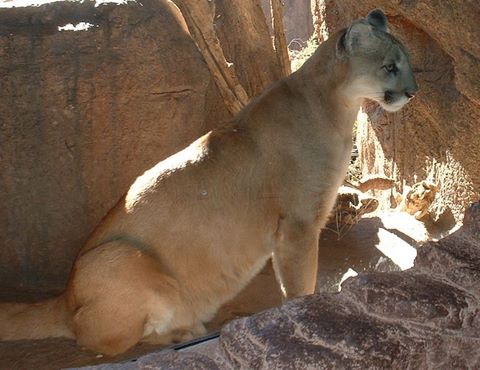 Lions in Arizona are larger cat than the bobcat, whereas the males can weigh as heavy as 150 lbs. The females weigh approximately 75 lbs, but will sometimes weigh up 90 lbs. Long in nature, this animal is approximately 6 feet in length with large feet. I am still looking forward to seeing my first lion.... I have at least seen my first bobcat!

According to Arizona Game and Fish, this animals choice of prey is the white tail and mule deer, but it will also hunt livestock and javelinas. At the top of the food chain, they like to keep spatial distance from other lions as a means for their survival.

Arizona Game and Fish also notes that they "have one of the most extensive ranges of any land mammal." A male's territory can spread over many miles over the path of females. Like any house cat allowed to roam, the mountain lion keeps a close eye on females as he tracks the urine scent marked by the females. Like the bobcat, the male lion is not a part of the offspring rearing. The male mountain lion will only stay together with the female for a few days of breeding.

Once the little three to four kittens are born, the kittens will stay with the mother for up to about a year and a half. During this time, the mother will instruct them how to do the obvious of hunting and teaching them how to survive in the wild. The offspring will remain together after they separate from their mother. The reason that the kittens stay grouped together is so that they better their chances for any successful hunt.

Where Do Arizona Mountain Lions Choose To Live?

Young lions will wander around searching for an appropriate home to settle. These cats typically live in a 25 square mile radius, but, as with other animal species, this is becoming increasingly more difficult for them to do because of the fact that their land is being taken over by mankind. These AZ mountain lions have no choice than to become more overcrowded with the continuing urbanization that surrounds them. Let's help preserve their habitat... please!

These Arizona Mountain Lions and bobcats prefer the same type of habitat and are most common in rugged, heavily vegetated areas.

Both cats can also be found in a variety of habitats, such as the forest areas of Arizona, canyons, and sections of the Sonoran Desert.

The lions differ from bobcats as they don't bare young just in the spring. Arizona lions will produce litters at any given time throughout the year. Without kittens, these Arizona cats are then able to kill just once over a period of several days, as their prey is generally larger than the bobcats.