Arizona Rattlesnakes are something that many people are not too fond of... but you have to admit, they are a beautiful creature, right?  I am certainly one of those people.

How about YOU?  Do you like rattlers? I certainly appreciate their beauty as I said, but I honestly have to say that I would rather not discover one unexpectedly while hiking. I have seen a few when hiking as one might expect.  You just have to be aware of where you are walking and be conscious of where you are stepping. 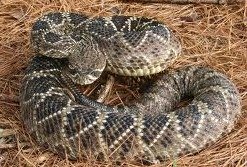 Many people are afraid of poisonous snakes, me included. But the fact is, more times than not, people fear any AZ snake or any other snakes for that matter... usually it is because they don't understand them.

Perhaps you, too, would feel differently about Arizona snakes if had a greater understanding and maybe even love for these creatures, if you were better educated about Arizona Rattlesnakes.

Here are some Rattlesnake Facts, according to Pima Community College, Tucson, Arizona

For more information on rattlesnakes, courtesy of the Arizona-Sonora Desert Museum in Tucson, click here.

Tips If Bitten By A Rattlesnake

Note that I am NOT giving you medical advice. It is strongly suggested that you seek immediate professional medical attention if injured in any way by a rattlesnake or any other type of snake or animal.

The following information serves only as a guide. Always consult professional advice for any and all snake bites or any animal injuries.

IF YOU CHOOSE TO READ ONLY ONE THING ON THIS PAGE, JUST REMEMBER THIS:

How Can You Tell If A Snake Is An Arizona Rattlesnake?

Look for the distinguishing marks. If it is a rattlesnake, it will have a flat, triangular shaped head. Many of these snakes will have coloration of patches with tan and brown.

Probably the easiest way to determine whether or not you are seeing a rattlesnake or not, is if you see the rattler that all of these snakes have.

Keep in mind that the younger Arizona Rattlesnakes may not have fully developed rattlers, which may be hard to identify at first glance, so be careful and do not get any closer!

What Time Do Snakes Come Out During The Day?

As with all reptiles, rattlesnakes, are not able to regulate their own body temperature. They are more active when it is cooler, but they can and do come out of hiding at any time of the day.

Here in the desert, Arizona Rattlesnakes can easily overheat and die if they cannot find a cool place to keep themselves cool. They like to stay cool underneath rocks or bushes where it is significantly cooler.

Behavioral thermoregulation is described when the snake selects these locations which help it moderate its internal body temperature.

How Do You Determine How Old A Rattlesnake Is?

A common misconception some have had about determining the age of a snake is by the number of segments that a snake has in the rattle.

According the Arizona Game and Fish, (AZGFD) an Arizona snake's age is not determined by the segments it has. A rattlesnake adds a segment each time it sheds, which can happen more than once a year. It is also important to note that additionally, these segments will often break off.

How Deadly Are Them?

While the Arizona Rattlesnake is known as being venomous and a deadly reptile, there are actually very low fatality rates in humans. The bite is very painful, though and can be very frightening and should be taken very seriously.

You should still note that a large specimen of the common Western Diamondback can still consist of enough hemotoxic venom to kill an adult human. However, larger Arizona Rattlesnakes are usually less aggressive and most will only strike if they feel threatened or provoked.

Keep in mind that the smaller the body equals more potential danger to the bite victim. Also, the faster ones' metabolic rate and circulation, means greater potential for damage. Regardless of the possible serious health threat from Arizona Rattlesnakes, the key again, is to SEEK MEDICAL ATTENTION AS SOON AS POSSIBLE, as this WILL GREATLY IMPROVE the victim's chances of a complete recovery from the snake bite from any Arizona Rattlesnake.

The more the allergic reaction or negative side effects are, obviously the more damaging the bite.

Arizona Rattlesnakes also have the ability to control their venom flow and will usually refrain from using all of its venom. Victim beware though! The bite can still cause extensive tissue damage in the bite area.

How Can I Keep Snakes Out Of My Yard?

You can reduce the appeal of your yard to snakes by following these 10 simple tips:

1.  Cut your grass and keep it short. Keeping grass short will allow greater visibility and help discourage snakes from hiding out in the long grass to keep cool in the hot summer sun.


2.  Control rodents in your living space outside. This will help prevent Arizona Rattlesnakes believing that the outside of your home is a welcome mat!

3.  Keep your front and back yard free and clear of excess debris. Arizona Rattlesnakes like to hide under things such as wood or brush. Keep these items to a bare minimum to prevent them from being attracted.

5.  If you don't have a dog or cat, think about getting one. Just the presence of a dog or cat in the yard, helps deter Arizona Rattlesnakes! The odors that a dog or a cat gives off will help discourage a snake from calling your yard home. It is very important to note, though, you should NOT leave your dog or cat outside unattended as the possibility for a coyote attacking your canine or feline is becoming more and more common here in Arizona, as we continue to take over the coyotes living areas.

6.  As mentioned, Arizona Rattlesnakes taste the air, and they do not like the taste of sulfur. Consider purchasing powdered sulfur, available in the gardening section at your local home improvement store. The powdered sulfur is also good for preventing fleas and ticks!

7.  Arizona Rattlesnakes are smart creatures and will travel where food is. You can also help keep them away by keeping their prey, such as mice, rats and birds, to a limit.

8.  Mothballs are also a good deterrent against not only snakes, but small animals that you are trying to keep out.

9.  Consider applying environmentally safe repellents. Many of these are non-toxic which are safe to use.

10. Think like a snake! This may sound silly, but I believe it is true. My pest control provider told me this once and I always remind myself of it. (He was actually telling me to think like ants at the time when I was having a problem with ants who were really becoming a problem in my back yard.)

If you think like a snake, you can help prevent their numbers. If you were a snake ask yourself where would you like to hide? Somewhere cool, right? And hopefully underneath something to help keep you cool, right? OK, you get the idea...

What Should I Do If I See A Snake?

DON'T touch it! Just leave it alone! You should know that most reported snake bites occur after someone attempts to capture or kill a rattlesnake.

Why Does A Snake Constantly Stick Out Its Tongue?

The tongue of the snake is acts as a highly developed sensor for it's taste perception.

When the tongue is fully stretched outward, the snake is able to communicate with its surroundings. The tongue works in conjunction with something inside of its mouth, known as the Jacobson's Organ.

This may sound really weird, but the snake can actually taste the air which enables them to assess such elements as danger, food, prey, etc.