The Western Banded Gecko, sometimes referred to as Coleonyx variegatus, is a very visible creature here in the desert southwest. In fact, I have seen these little guys many times; I just never knew what they were called.

I figured they were some type of Gecko and I was right. It was rather funny how I discovered what their exact name was.

As I went to manually turn on the water for the plants one morning, I opened up the irrigation control valve box, and much to my surprise, I noticed what appeared to be a Gecko inside the box!

To be honest, I was very startled by this! I certainly was not expecting to see a Gecko. 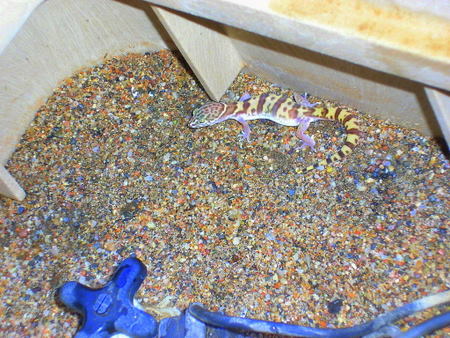 Notice how he blends right in with the soil. I didn't notice it right away as it matched the sand so well!  They are actually kind of a creamy yellow lizard with reddish brown crossbands and spots.

Look at the legs and the side of this little creature. Do you see how they are also tinted with pink?

According to Arizona Game and Fish, the juveniles usually have very distinct dorsal bands that resemble spots. These markings become more obvious as the and reticulations as it ages.

This type of Gecko also has a blueish-green coloring that is not very visible, but the coloring does exist. The tint is located on the skin right above the eyes.

The Western Banded Gecko has slender little toes with a "meaty" tail. His pupils are vertically elliptical and the eyelids, have the ability to move, unlike other types of Geckos.
You will find this specific type of lizard throughout most of the western and sub-Mogollon Rim southern Arizona.

This Arizona gecko is also found as far north as the Grand Canyon as well as in areas from near sea level along the lower Colorado River to approximately 5,000 feet.

The Western Banded Gecko is tough in nature, as it can easily adapt to some of the most harshest living conditions.  You would not think so, looking at it. I think it looks like a very fragile little lizard.  It is not though.  The lizard can be found living in some of Arizona's harshest environments, such as in habitats ranging from extremely dry conditions to sand dunes and creosote-bush flats. You can also discover this creature through rugged terrain rocky slopes and in the high desert plateaus, just the same.

These Arizona lizards are nocturnal, which means your chances at seeing them are at night when they can be seen crawling on the ground surface. They are also known to like hiding under surface covers, like my irrigation control box!

During late fall and the winter months, this Gecko actually hibernates.

If it is approached and senses it is going to be attacked, it has the ability to move in such a way senses danger it twists and turns it's tail in a wavelike manner, in an attempt to scare off predators. In addition, it can also regenerate its tail if attacked. That is so true... one of my felines got a hold of one of these and it lost the tail but survived and grew a mew tail.   When they are attacked in the tail area, the tail will simply fall off in that area, allowing the lizard to get away.

When the Gecko is captured it will often squeak, too. My cat is notorious for catching these little guys and I will tell you that they really do squeak! Fortunately they are able to get away from her, as a part of the tail is the only thing she has to show for!

The Western Banded Gecko lives off of insects such as beetles, who also like to call my irrigation control box, home! These lizards also like grasshoppers, spiders, termites and other small insects.

They reproduce in both spring and summer and will usually lay one or two eggs at a time.