There is so much History of Arizona, so if you are a history nut, you will appreciate Arizona's history. Arizona was the 48th state to join the United States back in 1912 and is known as the Grand Canyon State. 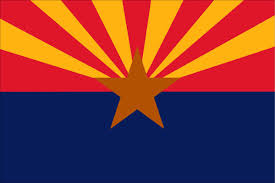 Arizona was actually the last of the of 48 contiguous states to join the Union. Arizona is bordered by Mexico and the U.S. states of New Mexico, Utah, Nevada, and California. In all, the state covers 113,999 square miles. Arizona's capital is Phoenix. Humphreys Peak is the highest point, equaling 12,633 feet.

According to the Wikipedia Encyclopedia, the name Arizona comes from "Arizonac," from two Papago Indian words which mean "place of the young spring." It is also said that a Spanish captain, named Juan Bautista de Anza, was given the duty to collect taxes for the king of Spain and was sent to the area. He wrote back to Spain, noting that this area was known for its rich mines and that the Indians referred to it as "Arissona."

It is believed that historians believe that the word "Arissona" stemmed from the Tohono O'odham Indian word, "Arizonac." The name "Arizonac," is believed to have come from two additional Tohono O'odham words. Ali, meaning small and Shonak, place of the spring. And, Ali-Shonak, means the place of the small spring. It would take a long 127 years before the word Arizonac would be known as "Arizona."

It was on March 13, 1687, when a man known as Eusebio Francisco Kino, came to America. Father Kino arrived in Sonora at this time to work with the Pima Indians. He was a Catholic priest who became famous in what is now considered northwestern Mexico. Kino established the first Catholic church in Arizona. He was also famous for Christianizing the indigenous Native American people here in Arizona and Kino established well over 20 missions and country chapels.

Here in the southwest, the missionaries usually focused on establishing agricultural missions among the Native Americans. The missionaries, such as Kino, would set up in various areas with buildings such as churches and adequate living areas. The missionaries also served as ranch managers for these settlements that were created.

Father Eusebius Kino, duplicated the same efforts that he carried out in New Mexico, into Arizona. The buildings that Kino and his missionaries constructed, were built with strong walls for defense for protection from other Indians. Some Indians did not appreciate their teachings to both the men and women Indians and did not like it that the missionaries were teaching them anything.

Much to the dismay of some of the Indians, they were shown how to cook, sew, how to cut trees, plant their crops, build, farm or other skills or trades, such as tanning leather.

During this period of time, the area known as the Pimeria Alta, was defined as the Upper Land of the Pima Indians. Kino lived here with these Indians for close to 25 years and also explored northward into the Gila River area, which is now known as the Ruins of Casa Grande National Monument located near Coolidge, Arizona.

Kino was not only active in the missionary sense, but he also was well known for other such things as astronomy. Eusebio was an expert astronomer, map maker, mathematician and the author of many religious books. He holds the honor of drawing the very first accurate maps of Pimería Alta, the Gulf of California and Baja California.

Eusebio Kino also baptized more than 4,500 Pima Indians and helped to establish many of the agricultural missions. Sadly, though, his life was cut short after he was shot by rebellious Indians in 1711. Arizona was without a priest for more than fifty years after Father Kino's death. Unfortunately, the second priest that succeeded Kino, was later murdered by the Yuma Indians.

He was well known in all areas pertaining to the History of Arizona, as he built missions extending from the interior of Sonora 150 miles northeast to San Xavier del Bac. This structure, in fact, still exists today and is a functioning Catholic parish located near Tucson and is one of many landmarks, if you will, in the history of Arizona.

Father Kino also constructed an estimated 19 rancheras. These rancheras supplied the cattle necessary to sustain the new settlements. He was also instrumental in the return of the Jesuits to California in 1697.

When anyone mentions the history of Arizona, Father Kino always comes to mind to those who are even remotely familiar with Arizona history. Kino lived alongside his missions until his untimely death in 1711 in the city of Magdalena de Kino, Mexico. He has been honored here in the United States as well as Mexico. You will find this honoring in street names, monuments and towns, which have proudly used his name that has become a legend in the history of Arizona.

It was Spain who founded fortified towns (presidios) at Tubac in 1752 and Tucson in 1775.

The history of Arizona was recorded by Europeans when a Franciscan identified as Marcos de Niza, explored the area in 1539. Explore Coronado entered the area between 1540–1542 during its search for Cíbola.

History of Arizona and Population

More than 25,000 years ago, the Navajo and Nomadic Apache Indians made their presence after the fall of the Anasazi and Hohokam civilizations. These Indians were followed in the 16th century by some Spanish treasure hunters from Mexico. This included Francisco Vázquez de Coronado, who established Mexico's claim into the area.

What is now considered Arizona, became part of the Mexican State of Vieja California following the Mexican's independence from Spain in 1821.

The history of Arizona tells us that the United States took possession of most of Arizona at the completion of the Mexican-American War in 1848. Then, in 1853, the land below Gila River was obtained from Mexico through the Gadsden Purchase agreement. Arizona was granted part of the territory of New Mexico until it was organized into a separate territory on February 24, 1863.

If you have paid attention to Arizona, you probably are aware that the state of Arizona has grown rapidly in population over recent decades. Some of the counties here are the fastest growing in the United States and show little, if any sign of slowing down in growth.

The history of Arizona goes back many years and certainly includes its agriculture, which attracted many settlers to the area. Today, however, it is sometimes more commonly known to some for its mines, electronics, desert wildlife, aerospace,and certainly the tourism, with an emphasis especially on golf and the continual sunshine.

Return From History of Arizona To Home Page