Have you ever seen an Arizona UFO? 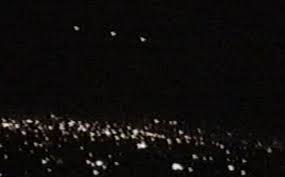 Even if you are the most skeptical person when it comes to Unidentified Flying Objects here in AZ, or anywhere else for that matter, you might just have a different opinion once you read about this major event that took place on March 13th, 1997 when thousands of people witnessed what was believed to be another account of a UFO in Arizona.

On the night that this took place, there were many witnesses who video taped the UFO in AZ sighting that happened right here in Phoenix. Local residents reported that they witnessed what was described as appearing and disappearing UFO lights that hovered above the city near the Estrella Mountains.

The local news and the national news both jumped on the UFO story that took place here in Arizona and it's still a very popular news topic in various media streams such as the History Channel, who recently did a story on UFO's that I have personally seen and appreciated.

It was such an amazing story that the national news television stations couldn't cover it up like many have done in the past.

There are those who believe that these so called UFO's in Arizona were just flares that resembled unidentified flying objects but there are many more people who still believe that the Phoenix Lights and other sightings of a Arizona UFO are the real thing.

If you ask others, believing in an AZ extra terrestrial is not a hoax... it is something that is very real.

There are many other reports of these unidentified flying objects here in Arizona.

Just as recent as January 9th, 2007, there was yet another witness who claimed to see an unidentified flying object.  The man was driving in the east valley when he saw some lights that were set low in the sky. This witness believes that these peculiar lights were in the area Gold Canyon, Arizona, which is approximately 35 minutes from the Phoenix metro area.

The lights were described as being situated in a straight line. The witness also described the far left light turning on and then turning off.

If you are still not convinced or would like to read more evidence about unidentified flying objects, take a look for yourself at another resource about UFO Evidence. Still not convinced? It's okay.....many just find it hard to believe that UFO's anywhere, especially a UFO in Arizona, could possibly exist.  If you ever listen to Coast to Coast with George Noory, you may just find yourself believing more than ever just as I do...

There are also UFO Videos to help you decide for yourself whether or not they really do exist.