When you hear the term, "Arizona Rodeos," what do you think of? You may or may not think of Arizona being the first state to ever hold a rodeo. 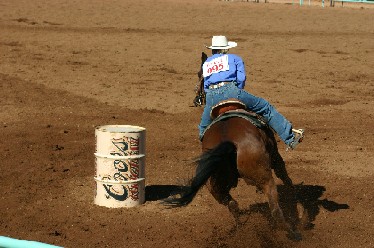 These rodeos, as other rodeos in other states, involve a series of both contests and exhibitions where fine skills in roping, riding, and other talents are needed to compete in these cowboy events. I am always amazed to see the skill level that these individuals have. It really is something to watch! It makes me very envious of their talents. When you see the things the cowboys (and cowgirls, too!) do. It is definitely an art along with a God given talent.

Looking for AZ horse competition?  Click here for up to date equine events which also include clinics and other horse events.

These competitions were first introduced to other cowboys and cowboy enthusiasts back in the period of the range cattle industry in northern Mexico and the western region of the United States beginning around the year 1867.

These days, the desert southwest is not only full of vast deserts, upper elevations of pine covered rolling hills, and snow covered mountains, but the desert is also home to, you guessed it........Arizona rodeos.

No question about it, Arizona is cowboy country! You will find an abundance of horses, both western and Indian art, ranches, and Arizona rodeos.

I knew I was in the "Wild, Wild, West, when I moved here when I made a stop at my local Walgreen's store, here in Gold Canyon. As I made my way up to the counter to purchase my items, right there in front of me stood an authentic cowboy. Now this wasn't just some guy with a nice pair of cowboy boots along with an attractive cowboy hat. No, this was the "real deal, the real McCoy!" This guy spelled the word COWBOY head to toe. There he was, dressed with the obvious hat and nice boots. Mind you, he had a pair of exotic snake skin boots which were more than "cool" looking. To top off the boots this cowboy had spurs!

I chuckled to myself thinking I really had arrived to Arizona because I knew that I would never see such a thing back in Wisconsin or Minnesota! He also had one of those real fancy cowboy shirts with white buttons. As I stood there waiting in line, I noticed that there was more to this picture as I noticed this guy was carrying a revolver on his belt! I later learned that Arizona allows one to carry a gun without a permit, as long as it is not concealed. Oh, and I should not forget that this cowboy had the rounds of ammunition to "boot" (no pun intended!) wrapped around the entire gun belt. This guy was all set. Who knows, maybe he was getting ready himself for the upcoming Arizona rodeos! I will always remember that experience. It was more than memorable.

It was in Prescott, Arizona on July 4th, 1888, where the very first official rodeo took place. I learned from the Sharlot Hall Museum, that this mentioned first rodeo was called a "Cowboy Tournament."

The reason it was called a "Cowboy Tournament" was because the committee wanted to create interest in the event as a means to bring in more money for the event.

The planning committee agreed upon the idea that they would charge an admission which in turn would help pay for the expenses of running the rodeo, including prize money for the winning rodeo contestants.

The success of this and other Arizona rodeos have kept Arizona rodeos alive as you will find many Arizona rodeos. Following 1888, the rodeo has continued to grow in popularity and has also grown into a multi-million dollar enterprise in 50 states."

The city of Payson also claims to be the oldest "continuous" rodeo, but according to records, that may or may not be true.

The Sharlot Hall Museum states that proving whether it was Prescott or Payson who hold the record for the longest ongoing rodeo, is difficult. The museum reports that there is nothing mentioned in the early years of Arizona rodeos that mentioning that Prescott was the first to have an organized rodeo. However, according to the "old-timers" such as Sharlot Hall, Levi Jones and H.D. Aitken, they were all quoted in the 1930's, stating that the rodeo was held every year, with its beginning in 1888.

It is also important to note that Prescott kept the rodeo alive and continued to hold the rodeo during war time as well as the Great Depression.

To determine which city actually holds the oldest rodeo, there are five factors that need to be met.

Their research concluded that in order to have a formalized rodeo certain criteria must be met. These were:

Arizona rodeos were and still consist of bronco riding, steer roping and other events. If you would like a little bit of trivia, ask yourself who won the bronco riding contest in l888. Give up? Okay, well, actually it was a tie. The winners were Juan Leivas and Charlie Meadows. Leivas was a member of the Date Creek Ranch, located southwest of Prescott, while Meadows was noted as being a "drifting cowboy from Gila County." However, it was Leivas who was awarded with the rodeo's first professional title. Also in 1888, it was Mose Bryan, who won the cow horse race.

The following year in l889, Juan Leivas came back and won the saddle bronco-riding contest.

The Tucson rodeo has been around for just about as long. Founded in 1925, the Tucson rodeo was created as an effort to bring vacationers to Tucson during the winter season. At first, though, the Tucson rodeo was titled, "La Fiesta de Los Vaqueros," by Leighton Kramer, who was the president of the Arizona Polo Association. The first rodeo took place at Kramer field and included just four events at the time. The events included steer tying, steer wrestling, calf roping, and saddle bronc riding.

Before the rodeo's introduction, there was a parade that took place. The parade was very popular and attracted many entries that ranged from local ranches, mounted polo players, to the 10th and 25th infantry bands from who came from the nearby Fort Huachuca.

The Tucson Rodeo quickly gained popularity. It was well known for bringing some of the biggest names in rodeo to Tucson and was extended to a four-day event back in 1945. The Tucson rodeo became a big part of what Tucson stands for and is certainly loved by many who share its legend.

I have been fortunate enough to take in one of Tucson's rodeo's a few years ago and I truly enjoyed my experience there. I was really taken in by the event and hope to do it again before another few years go by. There was so much talent; it was unbelievable. Even the little squirts were competing and doing quite well, I might add. One thing I wish I could have seen is the Tucson parade which, from what I have heard, is also a must see. The Tucson rodeo has the distinction of being the largest non-mechanized parade in the United States.


I hope that you have learned some very interesting facts about Arizona rodeos. I know that I certainly did. Arizona rodeos are full of history and they will never be forgotten as they show no signs of closing the gate! Yee-Ha!